Going on holiday in Karpathos is like doing a “journey in time”. Karpathos, majestic and mountainous, is located in the Carpathian Sea between Crete and Rhodes. After a long journey, you will find yourself on this mountainous island, maybe difficult to access but admittedly one of the most beautiful islands of the Dodecanese. It is an island with very lively traditions that the locals preserve – that’s why it is probably one of the very few islands where you will feel the hospitality of Greece as it was 50 years ago! Although the city of Karpathos is busy with many cafes, patisseries and restaurants, the island has not yet been handed over to mass tourism, so you can still discover small isolated beaches where you will be truly alone.

Do not forget to visit the village of Olympos, where women are still dancing in their local traditional costumes. Karpathos is the second largest island in the Dodecanese with beautiful beaches and many natural beauties. The southern part has plains and meadows, while the central and northern Karpathos are mountainous. Karpathos is the ideal island for a quiet holiday. Karpathos or Pigadia is the capital as well as the main port of the island.

Karpatho’s ancient name was Potidea or Poseidio. It is a modern city without any particular building or attraction. The city is built on the edge of the bay of Vrontos, a sandy beach of 4 km where one can swim or do water sports. On the beach there are remnants of the first Christian temple of Saint Fotini. Start from Pigadia and follow the road to Ammopi and Makry Gialos, go to Menetes and head for Arkasa where the Acropolis and the remnants of the first Christian church of Saint Anastasia are. From there the road goes to Phoenix, Lefkos and Mesohori. From Mesochori you will go to Spoa and continue to the picturesque settlement of Olympus. Only by arriving there you will understand why Homer when referring to Karpathos calls it the island of the winds. At the end of the road you will find Diafani from where you will return to the capital and on this route you will visit Kyra Panagia, Aperi (ancient Karpathos), Volada and Othos. With excursion boats you will visit the most picturesque beaches of the island and Diafani, which is the second port of the island. It has a beach with large pebbles and 312 inhabitants. In the northern Marine areas of Karpathos, the protected species Monachus monachus monk seal lives. The highest mountain of Karpathos is Kali Limni with an altitude of 1,215m.

According to mythology, the first inhabitant of Karpathos was Titan Iapetus, son of Uranus and Gaia, father of the gods and people long before the gods of Olympus. The island was first inhabited in the Neolithic Age. The relationship that Karpathos had with Crete played a major role in the development of the island during the Bronze Age. Then the most important port on the island, Potidea (today Pigadia) became a place of residence of many Cretans and thus acquired a Minoan character. The good relationship between these two islands continued until the 14th century BC. a period that the Mycenaeans conquered Karpathos. Potidea was abandoned after various raids after 1200 BC. The inhabitants of the island moved to safer areas such as today’s Aperi where they built the city of Karpathos. The Carpathians fought with Sparta in the Peloponnesian War in 431 BC and were captured by Rhodes in 400 BC. In 42 BC, the island was conquered by the Romans. In the centuries that followed, Karpathos conquered the Arabs, the Genoese pirate Moresco, the Venetians and the Ottoman Empire. The Italians captured the island during the First World War. Karpathos also occupied the Germans for a few years before the end of the Second World War. Karpathos was incorporated into the newly established Greek State along with all the rest of the Dodecanese on 7 March 1948. 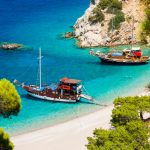 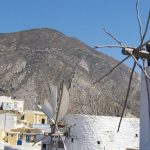 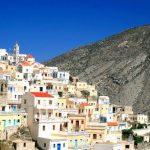 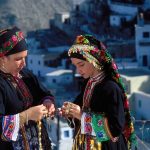